Fuveme is visibly shrinking: It is one of Ghana's coastal villages which are vanishing because of coastal erosion.

What was once a thriving fishing community is now best reachable by boat because of rising sea levels.

Waves have taken whole parts of the village with them into the sea.

Local resident Frank Kofigah told me that the village was 5km (three miles) from the coast a few years ago. Now the waves are just a few metres away.

"This used to be a very beautiful village - a lot of coconut trees, sea turtles, sea gulls, dolphins, sharks and whatnot," he says.

"It's been horrible. As a result of climate change we are now suffering."

I last visited the village, home to about 1,000 people, in October when the shoreline was between 30m and 40m away.

In the last few months, the waves have come closer and have destroyed parts of a school.

The roof and the windows of the structure have all been removed - and it was too dangerous for the pupils to stay.

The school now stands empty and the future of its 54 students also hangs in the balance.

The geographical location of Fuveme, in Keta municipality of the Volta region, makes it particularly prone to sea erosion.

It lies between the Gulf of Guinea and the Keta Lagoon.

Fuveme is not the only community reduced to an island.

The entire Keta municipality is now just a narrow stretch of land and is the area worst affected by sea erosion in Ghana.

A 2010 study by the World Bank paints a grim picture for the rest of the country.

Rising sea levels are swallowing up land along the West African coastline at an astonishing rate. 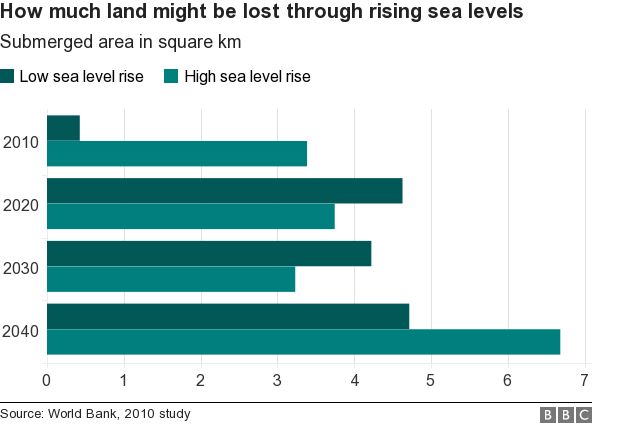 According to climate change expert at Ghana's Ministry of Food and Agriculture Eric Twum, coastal erosion is a major challenge for countries across West Africa.

Coastal erosion is a natural process but increasing global warming is causing a significant rise in sea levels.

"It is a big, big problem and the research indicates it's going to be increasing," he says.

Models for the next three decades show there will be more erosion and it will become more expense to manage, he says.

The building of sea defences is one of the surest means of solving the problem.

But, as Mr Twum says, it is an expensive enterprise.
Hefty bill

Because it costs about $90m for each 10km section, it has not been replicated along the entire coastline.

The government has often depended on donor agencies to fund sea defence and under former President Jerry John Rawlings the government got a $92m loan.

Poor funding is eroding hope of saving the communities from the sea, according to Keta MP Richard Quashigah.

"We are all very concerned, though we are classified as a lower middle-income country, we are still a very developing country. The resources are just not there," he says.

If nothing can stop the waves it will not be long before Fuveme is wiped off the map.